The time frame of 1978 through 1987 is one that will be remembered for OKSCAM, the three-year investigation by the FBI into political corruption throughout Oklahoma and into Texas.  From 1981 through 1984 the FBI convicted over 200 individuals, including 2/3’s of the sitting county commissioners, as a result of a purchasing kickback investigation.  Sixty of the seventy-seven counties in Oklahoma were involved.  Wagoner County did not escape the tarnish—three Wagoner County Commissioners were indicted and convicted:  Lee Roy Denton, Bob Mahan, and James Hays.  However, Wagoner County also played a positive roll in the investigation.  Sitting Commissioner Rufus Young assisted the FBI in their investigation and was commended by U.S. Attorney Gary Richardson “for working undercover with the FBI and for his effort on bringing corruption to the surface.” 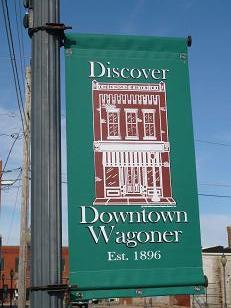 As if the Commissioner scandal was not enough, it was brought to light in 1984 that there was a problem in the Treasurer’s office.  Patsy Coates, Wagoner County Treasurer, was subsequently ousted and found guilty of three counts of embezzlement, two counts of forgery, and two counts of failing to make daily deposits.

The Sheriff’s office experienced its share of problems as well.  From campaigning in a county vehicle to overspending his budget, to allowing unauthorized persons to eat in the jail kitchen, to non-compliance with the jail standards, it seems the four sheriffs of this decade had their hands full.  The Sheriff’s office was becoming more technologically oriented, however, as a breathalyzer machine became part of their operating equipment and teletype provided them with access to criminal information throughout the state and nation.  The Sheriff also maximized his effectiveness by partnering with Broken Arrow to provide law enforcement services in the unincorporated areas that were within BA’s fence line.  The Corp of Engineers began providing funds for law enforcement services around the lakes on Corps land.  And always in a battle with the Commissioners over funding, the sheriff finally succeeded in furnishing deputies with county vehicles to drive.

The legislature attempted to address the system that created the opportunity for kickbacks to occur by passing legislation.  The Open Meeting Act was tweaked to provide more openness and transparency in county government.  Purchasing procedures were modified to require comparison of prices with those of the items bid by Central Purchasing and to require the naming of receiving and requisitioning officers for each office.  The Commissioners were encouraged to implement a procedure to govern the documentation of accrual and use of sick leave.  And the OSU Extension Office was charged with implementing a County Training Program for County officials and employees which would help professionalize county government.

In spite of the tarnish on the County and the State, Wagoner county government continued to respond to the growing pains experienced during this decade.  The 1980 Census put the population of Wagoner County at 41,693.  Broken Arrow was expanding into Wagoner County and many neighborhoods participated with the County in improving their surroundings.  Many road improvement districts and rural sewer districts were formed so that the residents could assist the County in improving the infrastructure in their rural neighborhoods.  A new fire protection district was formed in Stone Bluff in 1985.

Technological advances emerged on the scene as well.  Cable television companies vied for specific territories in which to provide their service.    The County installed a new phone system that would allow “transfer” of calls.  Tulsa was long distance at this time and the Commissioners considered putting in a Tulsa phone line to eliminate the long distance charges.  Computers were coming into their own as well and the Commissioners discussed purchasing one for “use of all the offices.”

The consideration of computers may have been encouraged by a situation in the Treasurer’s office in 1982.  The Treasurer had to request funding for the bank to process the backlog of mail in the Treasurer’s office as she had only five employees and all work had to be done by hand.  She had ten to twelve boxes of unopened mail containing tax payments from the citizenry.  The Board approved funding for the bank to handle the backlog and to get the deposits into the County’s accounts.

Cooperative ventures became the norm.  Not only did the Commissioners cooperate with the residents to improve services, but also with the neighboring communities. They partnered with Broken Arrow to  signalize 71st Street and County Line, Highway 51 and 81st Street as well as  to pave roads like Evans Road, Midway Road, 101st Street and others.

Other efforts to keep up with the growth included the formation of County Trusts and the creation of a Planning Commission which had long been under discussion.  The Commissioners authorized the formation of the Wagoner County Public Building Trust Authority to issue bonds for a Health Department Building.  The Home Finance Authority was created to assist low income families.  The Wagoner County Economic Development Authority was created to manage and encourage the growth of business and industry in Wagoner County.

Planning and zoning issues continued to abound.  Finally, the City of Wagoner and the County joined together to form the Metropolitan Area Planning Commission.  The Planning Commission established subdivision regulations, specifications concerning the placement of utilities on right of ways, and adopted national codes to govern construction of buildings and the installation of plumbing and electrical wiring.  Flood control became a part of their duties as Wagoner County experienced severe flooding in the 1984 Memorial Day Flood and the Flood of 1986.

County government was also seeking ways to increase the financial resources to keep pace with the growth.  At the state level, the Gross Production Tax and a 1cent tax on gasoline was passed to fund road development.  The State Equalization Board increased property taxes on agricultural land.  The Commissioners began having discussions about bond issues or a county sales tax as a means to increase their revenue to provide much-needed services.

As the monies increased, so did the requirements that came with the receipt of the funds.  The Highway Bridge Replacement and Rehabilitation Program mandated bridge inspections and the posting of load limits for all bridges on school routes.  The Commissioners were responsible for repair and replacement of county bridges and for applying for financial assistance from the Department of Transportation.

At the national level, the federal government began to attach restrictions to the revenue sharing money it provided to the counties.  Making the courthouse handicap accessible and providing a grievance process for employees were two of the requirements Wagoner County had to implement in order to receive federal funds.  The federal government also passed Minimum Jail Standards and required Health Departments to inspect county jails on a yearly basis.  Wagoner County consistently failed the jail inspections for violations ranging from broken windows, needed electrical and plumbing repairs, to lack of sanitary conditions in the kitchen and the need for a second exit in the jail (fire escape).  Improvements were always made just in time to keep the jail from being closed by the authorities.

There was also a focus on providing quality of life amenities for the residents of the County.  Summerfest was held on the courthouse lawn.  The Fair Board’s efforts resulted in the purchase of 14 acres as a site for the Wagoner County Fairgrounds near Coweta.  In Wagoner, the County was able to establish a 162.8 acre Recreational Complex on land transferred to the County by the United States government.  The Commissioners began contracting with the US Fish and Wildlife for beaver control.  The employees were not left out either as in 1981 the County began providing health and life insurance benefits to its employees.  In 1987, the Commissioners appointed a “blue ribbon committee” to study county government and facilities.   And the Commissioners called an election to determine whether Wagoner County wanted “liquor by the drink.”

In spite of OKSCAM, the people of Wagoner County continue to thrive and strive in support of good government.  Their resilience will carry the County through to its own centennial celebration in 2007.