The decade from 1958 through 1967 encompassed the creation of several entities to handle the growing population of the County and to bring amenities to the people to enhance their quality of life. Fire Protection Districts and Rural Water Districts are two examples.  Cogs were created to provide local governments with technical assistance to meet the ever-complex demands progress was bringing.  Growth was evident as several new towns came to life and construction of the Verdigris Navigation Project became a reality.  The services provided by the County increased as well with the creation of the County Civil Defense Organization and increased funding for the Wagoner County Health Department. 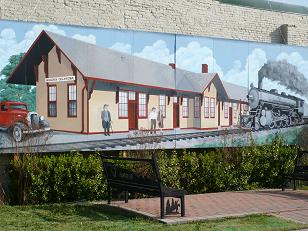 As growth was occurring, the legislature saw the need for counties to have the authority to manage their growth.  They gave the counties authority to establish planning commissions to create zoning regulations, building codes, housing codes, street and transportation plans, and other necessary regulations to ensure that the needs of the residents as well as the expansion of business, industry and infrastructure occurred as necessary.  On April 1, 1966 the Board created the Wagoner County Lake Area Planning and Zoning Commission with a 5 member board.  One member of the board was to be from each Commissioner’s District and the remaining two were to be appointed by a majority vote of the Commissioners.  Vacancies were to be filled by the Board of Commissioners.  The first members were appointed on July 18, and were Rhinnie Wagner from District One, Densil Allen from District Two, Fred Hiner from District Three, Commodore Payne and Roy Lee by a majority vote of the Commissioners.

The legislature also recognized that many of the counties in Oklahoma did not have the expertise nor the funds to employ technical experts in the area of environment quality, solid waste management, water resource management, emergency communications, and the national mandates related to them.  In 1965, legislation was enacted to create Council of Government (COG) entities.  The purpose was to increase the efficiencies of local governments by enabling a mechanism for formal cooperation to occur.  In August, 1967, one such entity, the Eastern Oklahoma Development District (EODD) presented their membership bill to the County Commissioners.  The County Attorney was not sure that there was any authority to pay the claim, but by September 29, the Commissioners paid the claim and their relationship with EODD began.  That same year, the Indian Nations Council of Government (INCOG) was also recognized as a COG that would service Wagoner County.  Wagoner County is one of 7 counties which have the option of dual participation in two COGS.

The Commissioners were testing the bounds of their authority during this time as it related to the provision of services to cities and citizens.  The District Attorney advised that it was “a violation to spread gravel on private property” but that the Commissioners could “load gravel onto city trucks and spread gravel inside the city limits since the gravel would be spread on public properties for public use.”  He also said that the Commissioners could work on city streets as long as it was a “public street or road” but that they could not work on undedicated roads in subdivisions.

The Board was involved in two lawsuits, one instigated by the elected officials against the Board for payment of claims for July, August, and September in the amount of $200 for the Attorney and Judge and $100 for each of the other elected officials.  A writ of mandamus was issued and the claims were paid.  The Commissioners themselves brought suit against the State Board of Equalization for increasing the valuations on rural property.  They lost the argument that it was a scheme to increase taxes rather than a tax equalization measure and ad valorem taxes on rural property were raised throughout the state.

There were no wars being fought at this time but in 1964, President Lyndon B. Johnson declared War on Poverty in his State of the Union address.  To combat this “war”, Congress passed the Economic Opportunity Act which allowed local application of Federal funds targeted against poverty.  On July 30, 1965 the Commissioners designated the Wagoner Small Business Development Center to begin studies for a general plan of combating poverty and the social, educational, and economic conditions therein for Wagoner County.

Probably the most far-reaching event of this decade was the beginning of construction on the Verdigris Navigation Project.  Since the 1920’s there were advocates for the development of the Arkansas Basin not only for flood control, but also for navigation possibilities.  One of the men was Newt Graham of Tulsa.  Floods in 1923 and 1927 caused Congress to pass a flood control act which included the Arkansas River as part of the survey study.  As the studies continued, so did the floods.   In 1946 several businessmen of Tulsa formed the Arkansas Basin Development Association and led the effort for Arkansas River Navigation legislation which finally was passed by Congress July 24, 1946.  The construction was actually started in 1950 but the Korean War interrupted the progress.  Another cause for delay was that a major problem with silt was identified.  The accumulation of silt in the river bed would make navigation on the river impossible.  Until the silt problem was solved, future progress was deferred.

Professor Hans Albert Einstein, son of the famous scientist, proposed a way for the river to clean itself.  His idea was tested and proved to solve the sediment problem opening the door for construction to begin again.  In 1955 construction of the lake dam projects on Lakes Eufala and Keystone began and work resumed on Oolagah Lake.  Keystone Dam was completed in 1964 and in 1967 the people of Tulsa passed a 17.5 million dollar bond issue for port development.  Rogers County joined in with funds for the 2000 acre Tulsa Port of Catoosa.  Construction also began on Lock and Dam # 17 on the Verdigris River in Wagoner County.  The US began condemnation proceedings for the establishment of Lock and Dam #17 and the Commissioners vacated county roads and arranged for the removal of the Verdigris River Bridge so that construction could begin.  It wasn’t until 1970 that the waterway was ready for use and for other ports to be built.  The visionaries of the 1920’s would be pleased with the results of their labors.  Wagoner County is a beneficiary of their foresight as the waterway runs through the heart of Wagoner County.  Visionaries here now have the opportunity to lay the groundwork for future possibilities and build on the dreams of those who went before.