The Commissioners were busy during this decade with routine business--continuing the expansion of farm to market roads as well as opening up section line roads as the demands for transportation routes increased.  Final agreements were made with the Corp of Engineers regarding the Fort Gibson Dam and Reservoir which was completed in September of 1953.  New responsibilities included the Commissioners becoming responsible for distribution of commodities for the State Welfare Department. 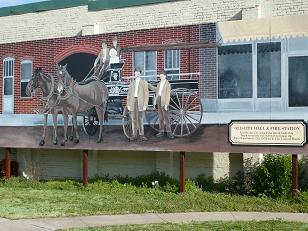 The Commissioners worked hand in hand with the Excise Board when it came to budget matters.  Salary raises were in the discussions and in 1948 the employees of the county received a 20% increase.  The economy slowed during the 50’s and when the Oklahoma Legislature passed a new salary bill in their 1953 session, the Commissioners issued a statement that the County was unable to finance the budget under the new salary law and would have to continue to operate under the old one.  The County Law Library was established in October of 1954 as the majority of its funding would come from the Court Fund.  A Board of Trustees was appointed for the Library and the Law Library Fund was established.

In April of 1948, the Commissioners received a petition from the West Side Club and the Veterans of Foreign Wars to erect a memorial plaque for the “Wagoner County boys who died for their country.”  They wanted the plaque to be located on the southwest corner of the courtyard.  There were no other annotations in the minutes during this decade about the memorial and it wasn’t until 1994 that the monument was built.  Evidence of modernization occurring in Wagoner County is prevalent during this decade.  The challenge of getting electricity to rural areas was met with the 1935 Rural Electrification Act which enabled local cooperatives to build lines and provide power to rural residents with low interest government loans. The cooperatives were created as non-profit organizations which paid all surpluses back to members in the form of credit on electric bills or a check.   The Lake Region Electric Cooperative was incorporated in 1949 as a result of a division of the East Central Electric Cooperative’s territory into two units.  In 1951, the Lake Region Electric Cooperative petitioned the Commissioners for permission to erect poles, sustain wires, etc. for the transmission of electricity, bringing this much-needed service to rural Wagoner County.  According to LREC’s history, its service population has increased from 1700 members to 22, 377 members and it provides service today through more than 2,912 miles of lines.

Besides getting electricity to the rural areas, new technology was now available to assist law enforcement.  The Sheriff made a request to the Commissioners for a radio system to improve field communications for his deputies.  No decision was made on this matter in 1952.  In early 1953, a second request was made for a radio system with the County Attorney advocating for the Sheriff’s Department.  This request was turned down by the Commissioners due to insufficient funds.  However, a few months later, the Commissioners passed a resolution to purchase a two-way radio communication system for the Sheriff’s office.  The system was to have a 60-watt base station antenna, three 60-watt mobile radios units and one receiving unit.  The system was being purchased from Motorola Communications for $2,760.18 of which Wagoner County was to pay one half and the Civilian Defense Authority the other half.  This sharing of costs is probably what prompted the Commissioners change of mind as they included a statement that if the Civilian Defense Authority did not pay their half, then the purchase would be null and void.  The increase in the cost of doing business is evident when you consider that one hand held radio can cost today as much as the entire first system did during this decade.

Civilian Defense became a priority during this decade.  As with providing funding to increase emergency communications at the local level, so other entities were exploring ways not only to protect civilians, but also to use civilian volunteers as a component of national defense.  As tensions increased with the USSR’s nuclear abilities, which for the first time exposed the civilian population to attack, the government and the military sought ways to mitigate the threat.  Electronics and technology were coming of age, but they weren’t available to protect the country from an air strike as of yet.  As a result, the government depended on volunteer organizations to be the eyes and ears with which to detect threats to national security.  One such organization was the Ground Observer Corp.

The use of civilians as part of the Aircraft Warning Service defense effort had its roots in World War I and continued through WW II before being scaled back.  With the new threat from the USSR, however, a revised Ground Observer Corps was formed with 160,000 civilian volunteers throughout the country.  Members spotted and plotted the movements of potentially hostile aircraft over USA airspace by manning search towers and bare rooftops equipped with binoculars.  In 1956 members of the Ground Observer Corp approached the Commissioners about erecting a room on top of the Courthouse to be used as an observation booth.  However, by 1957, technology advances surpassed the abilities of the civilian observers and the Ground Observer Corps was phased out.  The Wagoner request may have come on the cusp of the technological advances that diminished the need for such a service.

Wagoner County schools were also in need of modernization.  From statehood until this time in history, Wagoner County schools were segregated and the minority schools were referred to as Separate Schools. In January of 1954, the Board received a report from the State Board of Education relating to the needs of the Separate Schools.  After reviewing the report, the Board found that most of the Separate Schools’ buildings and equipment were below the minimum standard required by the State and were outmoded for post war needs.  The Commissioners called for a bond election to raise funds for the separate schools.  The bond issue passed.  However, in May, 1954, the Supreme Court of the United States issued its decision in the Brown v. Board of Education, stating that “segregation of white and Negro children in the public schools of a State solely on the basis of race…denies to Negro children the equal protection of the laws guaranteed by the Fourteenth Amendment—even though the physical facilities and other ‘tangible’ factors of white and Negro schools may be equal.”  As a result of this decision, several citizens decided to protest the building of separate schools and threatened to file suit “to prevent the use of public funds for such purposes.”

They did file suit, but the Supreme Court of Oklahoma ruled for the Commissioners stating that the bond monies were for maintaining school property and that the separation of races issue does not impact ownership of the property nor make it illegal to use, repair and maintain it.  The school bonds were eventually financed and sold so that repairs and renovations could get underway.

In the midst of international threats, segregation issues, and the Cold War, basic problems of life still confronted the Commissioners. The years 1951-1957 were plagued with draught although not one as severe as that experienced in the 30’s.  The drought ended suddenly when rains of a foot or more caused all major rivers in Oklahoma to flood in May of 1957.  The floods caused extensive damages to homes and businesses.  There was $20M in damages to agriculture alone.  The Commissioners consulted with the County Attorney to declare Wagoner County in a state of emergency because of the flooding and the plight of the farmers.  Throughout the summer, budgets were prepared and requests were submitted to the State Civil Defense Administration for federal help in spraying infected areas and obtaining relief for the farmers.

At this point in time, the State of Oklahoma had been in existence for fifty years.  Modern life and technological advances are beginning to appear on the scene.  While the great ground wars ended, the Cold War began.  Government began to play a larger role in our lives as the threats and struggles took on national proportions and national solutions began to take shape.  As we know today, the pace of life will begin to escalate as Wagoner County proceeds down the path of the next fifty years toward the centennial celebration.