The Works Progress Administration (WPA) was established in 1935 by President Franklin Roosevelt as part of his economic relief package to combat the great depression which had enveloped the country after the stock market crash in 1929.  During the WPA’s eight-year history, the WPA built 651,087 miles of highways, roads, and streets; constructed, repaired, or improved 124,031 bridges, 125,110 public buildings, 8,192 parks, and 853 airport landing fields.  Wagoner County was one of the beneficiaries of the WPA during this decade, in particular, a new courthouse. 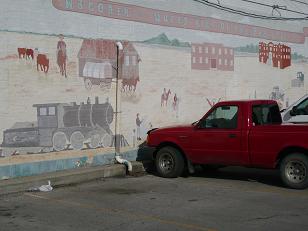 On July 12, 1938, the people voted to approve an increase in ad valorem taxation to 5 mills for the purpose of erecting a new County Courthouse with a new County Jail.  The Board of Commissioners subsequently entered into contract with an architect, Jos. I. Davis, to submit plans to the Federal Government through the Works Progress Administration of Oklahoma for the construction of the Courthouse.  By December of that year, all protesters to the building of the new Courthouse and Jail had been satisfied.  The Commissioners then began receiving bids for the various components of the Courthouse and Jail—from sand and gravel to iron works and marble, to benches for the District Courtroom seating.  In less than two years the building was complete.  On March 4, 1940, the W.P.A. certified that the building was ready for occupancy.

On April 1, 1940 the Board met in the new Courthouse for the first time.  In one of their first actions in the new Courthouse, the Board approved a request from the City of Wagoner that “all the waste rock, cement, and other suitable material derived from the old Courthouse” be given to them “for improving and repairing 3rd Street.”  They also approved the purchase of jail equipment in the amount of $12,028.00.  The plaque from the W.P.A. was mounted outside the front doors of the Courthouse and the plaque recognizing the Board of Commissioners, the County Clerk, and the Architect was mounted inside the entrance.  Both of these plaques can be seen today by anyone coming into the Courthouse.  Other W.P.A. public building projects were the National Guard Armory in Wagoner and the building which now houses City Hall in Porter, Oklahoma.

Taking advantage of the U.S. government’s involvement in the construction of the new courthouse, the government requested office space on the 2nd floor.  In 1940, President Roosevelt signed the Selective Training and Service Act which created the draft for military service.  The Draft Board for Wagoner County was one of the entities housed on the 2nd floor of the Courthouse.  Also housed on the 2nd floor was the Soil Conservation Service.  This entity was created in response to the soil erosion which created the dust bowl conditions throughout the Great Plains and in Oklahoma.  As part of the emergency employment programs of the Great Depression, the Soil Conservation Service offered an opportunity for employment to numerous specialists like agronomists, soil scientists, engineers, foresters, etc., to develop soil and water conservation measures.

Wagoner County benefited from other New Deal programs as well. In June of 1942, the Board signed a rental agreement with C. L. Follansbee to rent rooms 1, 2, and 3 on the second floor of the Kennedy building “for the use and benefit of the Farm Security Administration.”  The Farm Security Administration (FSA) was a New Deal program designed to assist poor farmers during the Dust Bowl and the Great Depression.  The greatest contribution of the FSA is a pictorial history of the depression, including the dust bowl of Oklahoma.  Many of their photographs can be viewed on the web today.  The organization was short-lived, however, and eventually was replaced by the Farmers Home Administration (FHA).

The winds of war were once again prevalent during this decade.  The build up for the war put an end to the depression but it also impacted the everyday lives of those working in the Courthouse.  The President activated the National Guard and Wagoner County Judge Jean R. Reed was called to active duty as of October 1, 1940.  Judge Jean Reed asked the Commissioners to accept his resignation as a conditional resignation with the caveat that when he returned, he would again be appointed Judge.  The Commissioners agreed and appointed Joe H. Ford as interim Judge until Reed returned.

The Board transacted several items of business related to support of the war effort.  In November of 1940, the Board instructed the Treasurer to purchase U.S. Treasury Bonds at 2 ½% interest with the sinking fund balances accrued for bonds which would not mature until 1946, a year after the maturity date for the Treasury Bonds.  The US declared war on Japan in December of 1941 and the needs for the war effort increased.  In July of 1942, the Commissioners approved a resolution authorizing the investment of school district and township sinking funds in U.S. Treasury War Bonds “to assist the government in the war effort.”  Later that year in November, they also granted a request from a representative of the War Production Board to remove an abandoned bridge located over Grand River in an area now under Ft. Gibson Lake to give to the Metal Reserve Company, an agency of the United States Government, “as materials are urgently needed in connection with the war program.”

As the war progressed, many prisoner of war camps were set up throughout Oklahoma and across the United States.  According to the Chronicles of Oklahoma, 26 counties in Oklahoma housed enemy alien and prisoner of war camps, primarily German POWs.  Wagoner County itself was the location of a prisoner of war camp.  In September of 1944, the Commissioners passed a resolution between the Board and the War Department, allowing the War Department to take possession of the Community Building at Porter (now Porter City Hall) for the purpose of housing prisoners of war. During the time it housed prisoners, the local newspaper, the “Wagoner Record Democrat” reported three escapes from the Porter camp who were later re-captured at Talihina. The site was opened September 16, 1944 as a branch of Camp Gruber.  It was closed November 16, 1945.

Other events during this decade included the Tulsa Corps of Engineers’ construction of Ft. Gibson Dam.  Construction was halted during the war, but in June of 1946, construction resumed with the Board closing and vacating all roads which would be inundated by the reservoir.  In other areas of the county, road construction continued to be a priority.  In an effort to assist farmers in marketing their products, the federal government provided funding for “farm to market” roads.  Wagoner County approved a “farm to market” road resolution and utilized these funds to develop roads needed for economic development.  7.441 miles of road from Porter to Tullahassee, 1.442 miles of road from Tullahassee east to US 69, and 5.938 miles of road and one bridge from Coweta west to the Tulsa County Line were submitted for this funding and were approved in August of 1946.

The decade from 1937 through 1947 was filled mainly with activities surrounding the war.  By 1947, however, the Commissioners were back to business as usual, focusing on road construction and responding to the needs of the citizens of Wagoner County.