One of the issues during this decade was whether or not civil township governments should or should not continue.  Civil townships were designated by County Commissioners who appointed a three-member board of trustees in each area to oversee their various tasks which included coordinating with the District Commissioner to develop roads.  The civil townships were different from the incorporated towns but they frequently had the same names, like Coweta and Coweta Township, Porter and Porter Township. 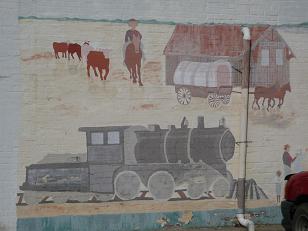 A few years after statehood, a constitutional amendment was passed which allowed counties to vote on the option to do away with township governments in their county.  This question was first put to the voters of Wagoner County on November 6, 1928.  The issue did not pass and the Commissioners continued to appoint township officers.  The legislature then detached incorporated towns from their townships in 1929 and the question was re-submitted to the voters a second time on November 8, 1932.  This time by a vote of 1,888 for and 1,554 against, township governments were abolished in the county of Wagoner.  The Commissioners ordered that all records, supplies, tools, and equipment belonging to the various townships be delivered to the courthouse by the first Monday in January, 1933.  This was not an unusual outcome as all township governments throughout the state were abolished by the middle of the decade.

During these early years, the Assessor had the same responsibility to identify property eligible for taxation and assess its value.  Unlike today, where field personnel are assigned the task, the Assessor himself had to post notices in three or more “conspicuous places” in each city or voting precinct naming the place where he would meet with the taxpayers for the purpose of listing their property for taxation.  The Assessor had to stay at least one day at each location where there were “sixty voters more or less.”  This ritual was authorized by the commissioners each year in January in preparation for the collection of taxes by the Treasurer.

The great depression and stock market crash occurred during this decade.  The only reference to the effects of these events in the Commission minutes relates to the collection of taxes.  Because of the  Bank Moratorium initiated by President Theodore Roosevelt on March 5, 1933 and the fact that the Treasurer’s office had been closed for six weeks due to the death of the Treasurer and subsequent audit, the Commissioners extended the time for payment of taxes until August 1, 1933.  It was also noted in the minutes that the Commissioners now required security from each depository bank in the sum equal to the amount of the deposit.  Since Congress had passed the federal deposit insurance bill in 1933, obtaining the security did not seem to present a problem.

In spite of the depression, the Commissioners decided to purchase the Courthouse and Jail as the permanent home of Wagoner County government.  The entire property and buildings was purchased from G. F. Moseley for $8000.00 in 1932.  They had previously been paying $200 a month in rent, so over time, the purchase would save the County money.   They continued to modernize the Courthouse by approving an expenditure of $475 for a lighting system in 1934.

While the depression didn’t impact the purchase of the Courthouse, both combined may have accounted for the fact that the County Farm Agent and Home Demonstrator positions were cut from the budget in July of 1931by a vote of 2 to 1.  The positions were left out of the budget for the 1932 year as well.  However in 1933 with new Commissioners in office, the vote was 2 to 1 to approve the contract for these positions and this valuable service to the citizens was resumed.

The State and Federal Governments continued assisting the County in building roads and bridges.  Roads coming on line were U. S. Highway 64, Highway 51B through Coweta, Porter and Tullahassee as well as a bridge over the Grand River.  The Commissioners were busy with roads too and began obtaining right-of-way to open a road in Choska Bottom.

Ferrys were still used to cross the rivers in Wagoner County during this decade.  One ferry seemed to take up more than its share of the Commissioners’ time, however, regarding the rates charged.  In September, 1930, the Commissioners set the rates for the Poindexter Ferry on Grand Lake as follows:

New rates were added in February, 1931, to accommodate increased demand and new kinds of equipment

The rates are modified again in April, 1932.  These modifications indicate that there was a growing demand for night time use of the ferry and a seeming reluctance to provide the service:

Then in August, 1933, the rates were reduced by the Commissioners, probably due to complaints of customers:

The owners of Poindexter Ferry, Jim Groh and E. L. Goff, finally petitioned the Commissioners for an increase in fares.  The weight of the vehicles was becoming an issue and passengers were piling in vehicles to avoid the pedestrian fees normally charged.  They requested that the rates be raised as follows:

The Commissioners did not accept the increases requested and adjusted some of the rates downward. This didn’t satisfy the riders of the ferry who objected to the increases and proposed further decreases to the Commissioners.  The ferry owners finally appealed to the District Court.  Finally in 1936, the Court tossed out the Commissioners’ rates and set the rates at the 1930 level.  The Court also stated that the ferry could not charge for a return trip if within 48 hours of the original trip nor for persons or passengers in vehicles regardless of whether or not they were related to the owner of the vehicle.  For the time being, the Court’s ruling settled the matter.

Wagoner County government continued to flourish.  The Commissioners were now approving over 4000 purchase orders a month.  The town of Porter, while losing its newspaper, obtained property and an easement for a water line and tower.  Telephone lines and electricity were also a part of the package.  The Oklahoma Centennial theme “Oklahoma Rising” aptly applies to Wagoner County at this time in its history.